A history of the Shriners

In 1870, several thousand of the 900,000 residents of Manhattan were Masons. Many of these Masons made it a point to lunch at the Knickerbocker Cottage, a restaurant at 426 Sixth Avenue. At a special table on the second floor, a particularly jovial group of men used to meet regularly. The Masons who gathered at this table were noted for their good humor and wit. They often discussed the idea of a new fraternity for Masons, in which fun and fellowship would be stressed more than ritual.

Two of the table regulars, 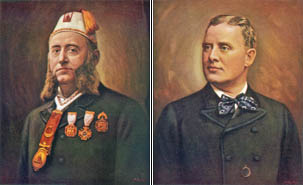 Walter M. Fleming, M.D., and William J. Florence, an actor, took the idea seriously enough to do something about it. Billy Florence was a star. After becoming the toast of the New York stage, he toured London, Europe and Middle Eastern countries, always playing to capacity audiences. While on tour in Marseilles, France, Florence was invited to a party given by an Arabian diplomat.

Florence, recalling the conversations at the Knickerbocker Cottage, realized that this theme might well be the vehicle for the new fraternity. Fleming took the ideas supplied by Florence and converted them into what would become the Ancient Arabic Order of the Nobles of the Mystic Shrine (A.A.O.N.M.S.)

On September 26, 1872, in the New York City Masonic Hall, the first Shrine Temple in the United States was organized. The original 13 Masons of the Knickerbocker Cottage lunch group were named Charter Members of Mecca Temple, and the Shrine was born. We are now known as Shriners International, with Shrine Centers in the United States, Canada, Mexico, the Philippines, Puerto Rico and the Republic of Panama.